Jonathan Kis-Lev was born in 1985 in the small village of Mishmar Ayalon on the outskirts of Jerusalem, Israel. The third son to Issic and Betty, Russian Jews who immigrated to Israel a decade earlier, young Jonathan has exhibited artistic talent from an early age. At the age of five he began private lessons with a Russian artist who taught the young boy the art of watercolors and oils. He studied at some of Israel's best schools of arts, and at the age of sixteen won a scholarship to study at Lester B. Pearson College of the Pacific in British Columbia, Canada, where he majored in visual art under the guidance of artist Art Brendon. At the age of 21 Kis-Lev exhibited his first solo exhibition in Tel Aviv. Attended by many, including Tel Aviv's Mayor Ron Huldai, the exhibition marked his debut in the Israeli art world. Soon after, Leumi Bank, one of Israel's largest banks, purchased numerous paintings for the bank's art collection. The artist began exhibiting in several galleries in Israel and abroad, while continuing to develop his style and technique. Today Kis-Lev has studios in Tel Aviv and Jerusalem, and is exhibited regularly in nine galleries around the world.

Technique and mediums Over the years, Kis-Lev experimented in various artistic techniques and mediums, from watercolors and oils to etching and sculpting. In 2006 the artist began focusing primarily on oil on canvas paintings. Two years later the artist began painting the base layer of the canvas in different hues prior to the application of the oil paint. This experimentation eventually brought to black paint as a background to the painting, while thin gold trim-line was applied for the contour. With time, this became a hallmark of his personal style. In 2008 the artist began experimenting with several techniques that were meant to enable him to "forget" all of his rigid art tutoring over the years, and begin "painting like a child again". He began painting the outline of some paintings with his eyes shut, while painting other paintings with his weak left hand rather than his strong right. Eventually the artist began painting the painting while the canvas was placed upside down, so that the skies were to be painted on the bottom, while the foreground elements were placed at the top. "This enabled me to paint in a warped way, naively". Some critics have compared this technique to that of Chagall, who also at times painted upside down. Others have referred to Munch, who strived to achieve similar feel of flow and movement. Style and concept Beginning in 2008 Kis-Lev developed his unique style, often referred to as pseudo-naïve by art critics. The artist somewhat adopted the commonalities of traditional naïve paint, such as bright colors, variations with rules of perspective. Nevertheless, the artist proved again and again, painting realistic and abstract paintings, that the use of the naïve painting style is highly intentional, which have made him recognized as a pseudo-naïve artist. Kis-Lev sees his bright and colorful paintings as a service to the world, encouraging people to follow their dreams and live life "filled with happiness". This has been one of the incentives for the artist to begin producing high quality reproductions of his oil paintings, in order to enable lovers of art to enjoy and be inspired by his paintings, regardless of financial means. The artist has donated to several non-profit organizations including Esra, Haddassah, Big Brothers Big Sisters, and others, while specifically aiming at children. 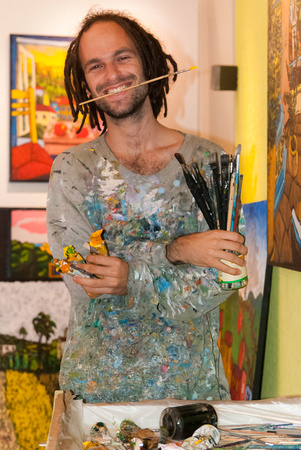